Here is a VB example that changes the Quantity of a BOM Row. To test this code you can add a button to this SDK sample:

After the code runs you can see the Quantity being changed in Vault Explorer. The ItemBOM and ItemAssoc are retrieved from the Item being edited.

The topic “ How To Acquire Files” in the the Vault 2017 SDK has a section titled: “File Transfer - Doing it the Hard Way”. In that section there are a couple of links to C# and VB examples. The DownloadFile function in these examples will not work with Vault 2017 due to the change to the DownloadFilePart method. It has changed in 2017 and doesn't return a byte array anymore, but a stream instead.

Here is an update to the DownloadFile function that works with the 2017 API.

You can specify a filter for the Select Entity dialog by using the ConfigureFilters() method on the SelectEntitySettings class. This method accepts a collection of EntityFilters which describe the behavior of each filter you want to supply to the dialog. Although the SDK doesn’t include an example of calling this method, it does provide a sample on how to create EntityFilters in the VaultBrowserSample app. (The Form1() constructor creates several entity filters).

After creating filters as in the sample pass the collection of filters to the SelectEntitySettings via the ConfigureFilters() method. You can see this done in the code example below.

Here is the SelectEntity dialog with the filters: 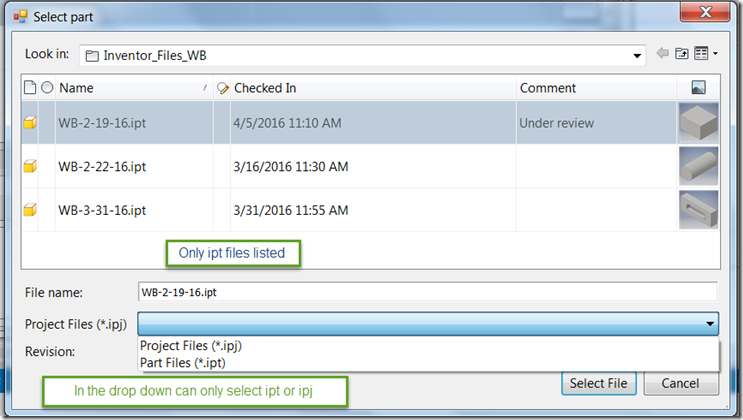 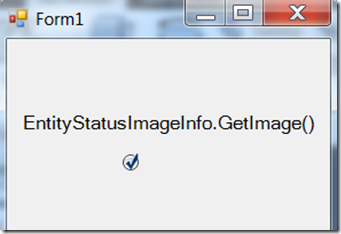 You can use the HiddenCommands function to hide commands in Vault Explorer. If this function returns names of commands they will be hidden. To get the names of Vault commands you can use the CommandIds property of the IApplication that is passed into the OnLogOn function:

Here is an example that uses HiddenCommands() to hide the Checkout, CheckIn and Rename commands.

To test this you can use the HelloWorld SDK sample:

See this post for an example code that you can use to display the command id (a string) every time you invoke a command in Vault explorer.

If files are renamed in Vault you may see that AcquireFiles() is not fixing the references. For AutoCAD this would be an XReference that was renamed and for Inventor it will be an ipt that was renamed.

A solution for AutoCAD files is to Add a Reference in your project to a dll named DWGDBXEngineWrapper.dll.  (Add it from this directory)
C:\Program Files\Autodesk\Vault Professional 2016\Explorer

Also add a using statement in your project:

8000 Error getting file from AVFS –use .FileServer instead of .DataServer

In a recent case, code that was downloading a file from an ADMS was getting an 8000 error (TicketInvalid) when that same code was accessing an AVFS and called from another exe. (The code was simulating running from a custom job).

Solution. (from a colleague in Vault Engineering)

It is not supported to sign in to one AVFS service with a ticket obtained from signing in to a different AVFS service.

For that case, the following strikeout code was wrong and needed to be replaced with the following highlighted code to fix the issue:
arguments += "/url \"" + loginCred.ServerIdentities.DataServer + "\" ";

Here are the details:

So, in that setup, there were services ADMS1 and AVFS1 on Server1 and you have AVFS2 (which talks to ADMS1) on Server2.

The first process, Process1, logs in to AVFS2.  So, its FileServer will be Server2 and its DataServer will be Server1. From the login it gets a Security header which has a Ticket, T1, which is associated with AVFS2 (that is the important part—that tickets are specific to the AVFS which you logged into).

Then the second process is started - Process2, giving it (among other things) T1 and the DataServer (i.e. Server1).  This information is used in the constructor of UserIdTicketCredentials. The constructor expects the url you are giving it is the address of AVFS you want to login to. So this logs you into AVFS1 on Server1 (and I assume this was not intended).

It would be nicer (IMO for troubleshooting purposes) if we just rejected the login from the get-go, but we don’t.

This Login method used to log in to the Vault does not support a read-only login.

Logging in this way adversely effects the Vault Browser control. Instead of the getting the icons in the icon column you get text with the ImageInfo type. (this behavior has been reported to Vault engineering).

The solution is to Initialize the library before logging in by making this call:

If a referenced part file is renamed and AcquireFiles is used to download the parent assembly. (include Children) the assembly and children part files are downloaded but the name of the child part file may not have the new name. Also the ResultDescription may have this error:

Here is a screenshot of the Watch window: 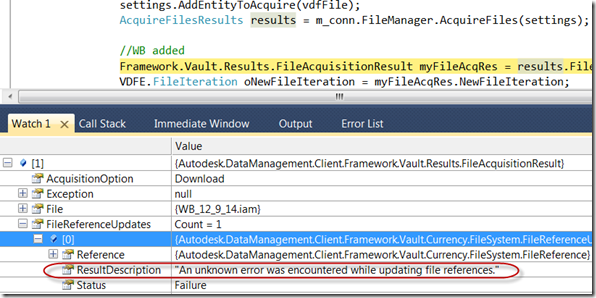 When the assembly is opened in Inventor. (It is looking for the ipt with the old name). Using the similar code with Vault 2015 this problem is not occurring.

In this case the problem was caused by older dlls in the SDK after a the vault service pack was installed. When Exceptions were enabled in Visual Studio this exception was displayed. Notice the Version number: 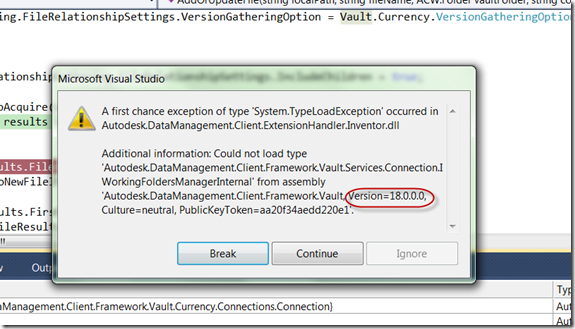 The version of Vault Explorer was 18.2.2.0. (Update 2). The problem was be resolved by uninstalling the Vault API SDK and reinstalling it. (Reference the updated dlls in the SDK bin directory in Visual Studio). The SDK install is here by default:

Note: Be sure to back up any customization you have done to the SDK samples before uninstalling the SDK.