Now let’s do it with API, here is the code snippet to do the same with API:

And here is the result: 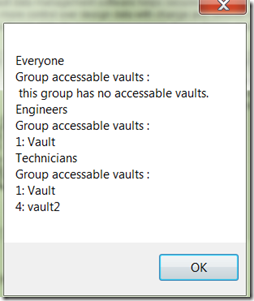 If you use the Visual Studio ETO wizard to create a new ETO project an error may occur when you Save the project. (If it was created in the C:\Users\xxxxxx\AppData\Local\Temporary Projects\) 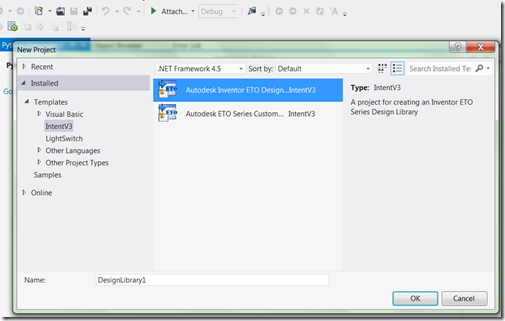 Error that can occur when you do a Save All: 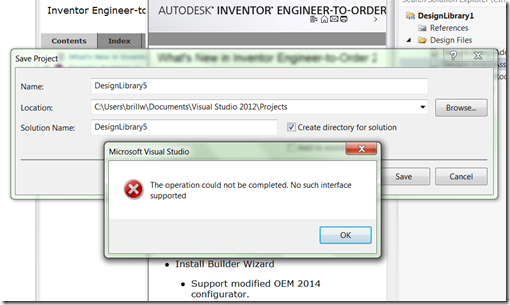 The work around to this problem is to enable “Save new projects when created” in Visual Studio Options: 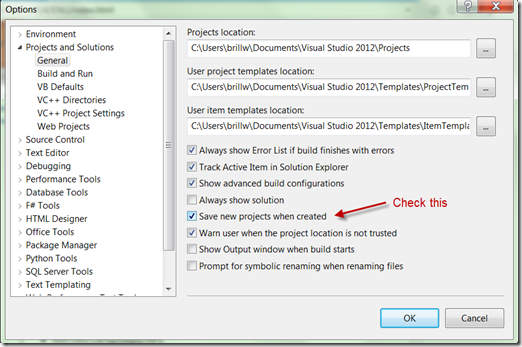 With this setting enabled a new project is created and saved without error. When this option is unchecked you can create and discard projects quickly. Unfortunately this is adversely effecting the creation of new ETO Studio projects. This behavior has been reported to ETO Engineering.

We are pleased to announce a significant enhancement to our Autodesk Developer Network (ADN) Support service. Apart from asking questions privately through DevHelp Online, you can now also ask your questions on the Autodesk Discussion Group (Autodesk Forums). Here is the API forums list that integrated with the DevHelp Online.

Many ADN partners already make extensive use of the Autodesk discussion forums – asking API questions on the forums as well as through DevHelp Online in order to benefit from the advice of as wide a range of experts as possible. But there is a problem with relying solely on a public forum for support - sometimes you don’t get an answer to your question. We’re fixing that problem by creating tighter integration between the Autodesk API forums and DevHelp Online (the ADN support portal).

From now on, if you ask a question on one of our managed Autodesk API public forums, you will benefit from the following enhanced support:

-   Members of the ADN DevTech team can identify you as an ADN partner on the forum and prioritize answering your questions.

-   If your question goes unanswered, it is automatically escalated to DevHelp Online to ensure it receives the attention it deserves.

-   If you’re not happy with the answer you’ve received from one of your peers, you can escalate the question to DevHelp Online yourself.

If you’ve not used the Autodesk discussion forums before, we encourage you to give them a try. You may be surprised at the breadth and depth of knowledge freely given by the community. With these enhancements for ADN Standard and Professional partners, you no longer have to choose between asking Autodesk or asking your forum peers – now you can ask Autodesk and your forum peers in the same place.

And while you’re visiting the forum, why not browse around and contribute to some of the discussions.

Taking advantage of this new service is really easy. The account you already use to login to DevHelp Online will also allow you to login to the Autodesk forums. If you are an ADN member, please visit the ADN extranet for more detailed information on how to setup your forum account so that you are correctly recognized as an ADN member and benefit from this enhanced support.

Unfortunately, it is not possible. This is not specific to Inventor or the other Autodesk products, but is the case in many applications loading AddIn's. The problem is that for various reasons, one of which could be e.g. speed, applications tend to load the AddIn into the default AppDomain. And inside .NET you cannot unload a single assembly, you can only unload the AppDomain the assembly was loaded into, as also mentioned here in context of AutoCAD: http://through-the-interface.typepad.com/through_the_interface/2008/09/tired-of-not-be.html

Note: you can logically unload an Inventor AddIn inside the Add-In Manager, i.e. its Deactivate function will be called where the AddIn can remove its user interface, stop listening to events, etc, but the dll itself will not be unloaded from the Inventor process.

One of the easiest ways to find out where to look for information inside the object you're interested in is to check it in VBA Watches window.

This article talks about the other options as well: http://modthemachine.typepad.com/my_weblog/2008/09/inventor-api-fundamentals-003---the-object-model.html

You just have to select the object in the user interface, then debug into a simple code like this and then you can hunt for the property you need: 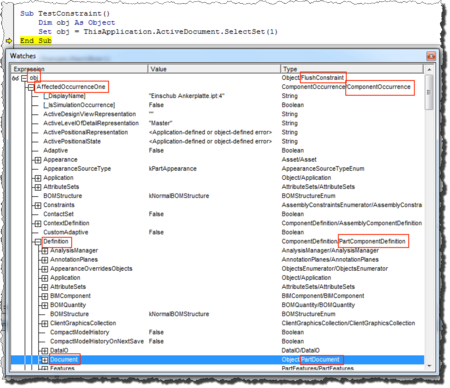 DevDays are just around the corner! 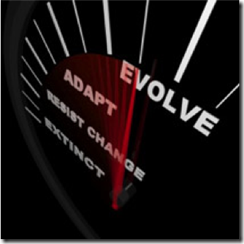 Where Desktop meets the Cloud

Got great ideas for cloud and mobile apps? Want to learn where Autodesk is taking the convergence of desktop computing and cloud technology?

If you’re an innovator developing on Autodesk platform technology and have not yet attended an Autodesk Developer Network Conference join us for a deep dive as we take an in-depth look at Autodesk’s newest technologies and the next generation of products coming in 2014. The Autodesk Developer Network is holding its annual, worldwide Developer Day Conference and DevLab in cities around the world from November 2013 through February 2014.

Called Autodesk DevDays 2013, the theme for this year’s event is rEvolution – Where Desktop meets the Cloud.  Come and learn about upcoming releases of several new web service APIs from Autodesk.  You’ll see how these new web services extend the power of the desktop: delivering easy collaboration, limitless compute power and big data – and are platforms that can deliver the same to you and your customers.  It’s an opportunity to learn about a range of “360 based” web service APIs delivering you Cloud based platforms for a number of industries - Manufacturing, AEC, Infrastructure and more. And, we will of course also cover what’s new in the next releases of our desktop products (AutoCAD®, Autodesk® Revit®, Autodesk® Inventor®, AutoCAD® Civil 3D® and so on)!

Note that material at Developer Days is forward-looking and highly confidential so ADN membership is required. Maybe you are using ADN Open and forums and would like to attend DevDays? Visit www.autodesk.com/joinadn or send an email to your local ADN representative and let’s talk. We like to hear from — and help — interested parties, innovators and companies just getting started.

Here are the dates for this year’s tour. For a more detailed agenda and to register your interest in attending a specific event, head on over to the registration page.

Win up to $5000, a newly released tablet computer and a trip to Las Vegas!

APPHACK 2.0 is a virtual code-fest to produce apps/plug-ins for: AutoCAD, Revit, Inventor and BIM 360 Glue. The theme of the event is “Connecting Autodesk to the Cloud” – and this is open to creative interpretation. Perhaps you can think of a way to wire our software into your favorite social media network or make use of infinite cloud computing to carry out CPU-intensive tasks. Or maybe you have a way to help users better visualize and share their ideas using a web browser. Build a standalone app for an AutoCAD, Revit, Inventor or a BIM 360 Glue product. Or build an app that takes advantage of the integration capabilities of BIM 360 Glue with either of the 3 other products families: AutoCAD, Revit and Inventor! It’s up to you. Code a new app, finish coding one you already have in progress or submit one you already have but haven’t published yet.

Find out more about the event here: