Offset a WorkPlane that is not Driven by an Offset Parameter

I need to offset a WorkPlane in a Part Document that is not driven by a model parameter. How can I do it so other work features based on it are offset as well?

The following example offsets a selected WorkPlane. After the WorkPlane has been offset it will be driven by a model parameter.

Issue
A recent case reports that the name of the result ProE file is not what the user sets, no matter with UI or API.

Assume we have a part named:

Save as to Pro/E file, the result file name is:

The transformation matrix  for ModelToSketchSpace can be obtained from the PlanarSketch object. It wouldn't be too difficult to calculate it ourselves, but a combination of the OriginPointGeometry, PlanarEntityGeometry, AxisEntityGeometry, and AxisIsX properties give us everything we need to compute this matrix.

The  function shown below accepts a PlanarSketch object as an argument and returns Matrix object which is required for Model to Sketch Space transformation. Try go through the code reading the comments.

ByVal sketch As PlanarSketch) As Matrix

' get the sketch origin point

' and the sketch axis

' to get the sketch direction

' to then get the sketch normal (unit vector)

' and get the vector

' finally get the X and Y axis according

' to the sketch property

' X axis along the sketch direction

' and the Y axis as the cross product X-Z

' or the Y axis as the sketch direction

' and the X axis as the cross product Y-Z

' finally set the matrix as a coordinate

Set a Spline Curvature at a Specific FitPoint in Inventor API

Issue
How to set the tangent vector (curvature) of a spline at a specific FitPoint through API?

Solution
The following code sample illustrates how to get and modify the tangent vector of a spline at a specific FitPoint.

2. Use API to get the tangent vector at the selected point by SketchSplineHandle.

Note: The "SketchSplineHandle" object has been introduced in the 2008 API, so this code is only supported by Inventor versions from 2008 on.

//Retrieves spline from the constraint

Issue
By default the standard parts are not sectioned  and the regular parts are sectioned in a section drawing view. How can I change this setting through UI and API?

In Inventor 2013, "Tools" -> "Application Settings" –> "Drawing" –>  "Section Standard Part”, there are three options available in the drop down list:

' Try to get an active instance of Inventor

' If not active, create a new Inventor session

If m_inventorApp Is Nothing Then

Get Working Folder by Vault API

Issue
From Vault Explorer or Inventor, you can map local folder (e.g. C:\Cad\parts) to Vault folder (e.g. $\StandardParts) through using Map Folders command under Access panel in Vault ribbon tab in Inventor. Is it possible to get the mapped local folder path through API? I would need this to know where I have to store Files downloaded via the Vault method “downloadFile(...)” (Storing it under the wrong path results in Vault not working correctly).
Solution

You can call DesignProject.VirtualVaultPath from Inventor API to get the mapped Vault folder information, as shown in below picture: 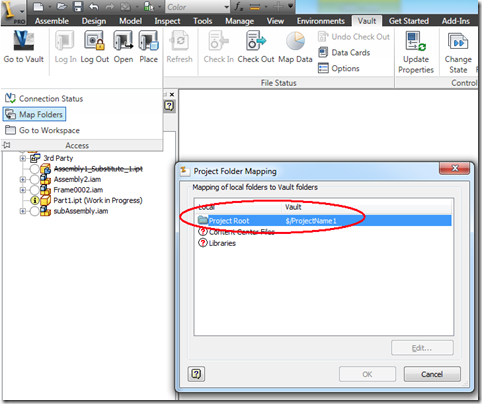 Another thing that needs to be handled is, if the Vault cleint is set up with the enforced working folder, then the GetEnforceWorkingFolder API would return true, you then should Call GetRequiredWorkingFolderLocation to retrieve the real mapped folder path, instead of using the information from WorkingFolders.xml because the later doesn’t help in this case.

For versions older than Inventor 2011, there is no DesignProject.VirtualVaultPath API that returns the mapped Vault folder set in the Inventor project. Let’s look at a workaround descript as the following:
*****
The correct place to get the Vault mapped folder is to read the Inventor’s IPJ file for Inventor IPJ file contains the mapping between Vault path and local workspace path.? Inventor project file is XML format, so you can rename .ipj file to .xml file then read/edit the file. If the project is Vault project, then you will find VaultOptions node in the project file, if the mapping path exist, you will see , you will see VaultVirtualFolder such as the following:

However the .ipj file format might be subject to any change in future releases without notice (so that we don’t officially publish its format). We don’t support direct access to the .ipj file. Please note that my above suggestion might be no longer able to work in future release.
*****
With Vault 2011 and older versions, there is no GetWorkingFolder API. The following describes a workaround that can get the mapped folder information by indirect way:
*****
The Vault to local folder mapping can be found in a file called WorkingFolders.xml. Actually there can be several of these files. Different users/servers/vaults cause more of these files to pop up. Here is the path:

Please only read this file. Don’t edit it. The customized application can read in this file and figure out where to copy the files so that they show up in the correct spot when the user fires up Vault Explorer.
*****

A potentially major performance problem was discovered in Inventor ETO Components 2012 and Intent Professional 2011 Update 3. A serious memory-crash problem involving the List data type discovered late in the release cycle of both products was remedied by making a copy of the list when it is referenced.  This was known to be a potential performance problem, especially with large lists, but it resolved the crash issue. Since release, it has become evident that certain coding styles exacerbate the performance problem.  For example, consider the following:

In this example, myList is referenced 7 times.  This is not an issue if myList is small.  But with 1000 elements, it is copied 1001 times, creating more than a million copies of the elements; this is a problem.

In VS 2010 I am trying to use the ETO Design Library template. I am getting a Licensing Error "Unable to initialize adlm". I close that error and then a Object reference not set to an instance of an object" appears. What can I do to resolve these errors so I can use the ETO template?

The problem can be resolved by adding the ETO bin directory to the system path. (adlmint.dll and adlmint_libFNP.dll are not being found).

On XP go System Properties, Advanced Tab and then Environment Variables. Edit the Path variable and add the ETO Components bin directory. It will be something similar to this "c:\program files\Autodesk\Inventor ETO Components 2012\bin".

Note: the paths in the System path are separated by semi-colons. ;

There are settings in the intent.config file. This file will be in a directory similar to this:
"C:\Program Files\Autodesk\Inventor ETO Components 2013\Bin\intent.config"

Set the value to zero for HideModelTree to enable the Intent Model Browser.

If these settings are commented out, the default behavior occurs: UI is visible in Inventor, and is not visible in OEM.

You can use Apprentice to get the file thumbnail. This C# form project puts the thumbnail in a PictureBox. The core code is in OnPaint of pictureBox.