The last weekend of September, I attended/sponsor a hackathon hosted at Cooper Union with over 300 students from different schools around the Tri-State Area, the name was HackCooper 2016. http://hackcooper.org/ 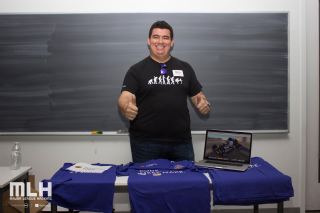 A week full of events where Pre-Hack Meetup, a Tech Talk, and the opportunity to give away Swag and submit a challenge for the students to participate in it were some of the activities I got involved with them. The challenge was “The Best Use of 3D in a mobile/web App"

My week started with a pre-hackathon workshop at the NYC Office, where I hosted 15-20 students from different majors, but mostly CS degrees. I did a 1 hour talk on Forge and it’s api’s, where I showed them it’s capabilities in order to spark their mind into new ideas for the upcoming hackathon. The workshop was a success based on the response I obtained from them, and the excitement about trying the api’s was a really good thing to see and hear.

What a fun lunch today with @cooperunion students at the NYC @autodesk office, can't wait for this weekend #HackCooper2016 #AutodeskForge 💻 pic.twitter.com/QLZfg0Szse

The Hackathon started on Saturday around 4pm, where sponsors were mentioned and thanked for their support of the event at the initial keynote, after an hour inside of the Auditorium, the teams gathered together to start brainstorming ideas for their upcoming projects. Sponsors had a room where they could give away swag and talk about their promoted technologies or challenges. The traffic of students which allowed me to interact with more than 80 students during 3 hours was amazing. I got a chance to show them what Autodesk Forge was all about and where we are heading as a company, about the cloud investment Autodesk is doing.

Tech talk at 9:15, tell me your favorite coding language #hackcooper get a sticker and get a shirt, and hear the challenge #hackathon #3D pic.twitter.com/oaouzZ8Z8t

From 7-9 I had the chance to help students as a mentor as well. I mentored a couple of students with the use of Autodesk Forge and others with different JS questions, mainly on the server side and a couple of React ones as well. The good thing was I had one of Facebook engineers there so I used him as a backup when I didn’t know something very specific about the framework. I got to sit down with 5 different groups where I also helped them put their ideas together in order to become an App for the event.

Around 9:15 It was my time to deliver a Tech Talk, where the students who didn’t have a chance to attend the pre-hack meetup, came by to one of the classes and heard me talk for 1 hour about 3D on the Web and the Forge API’s, mainly Model Derivative and Viewer. I had a full room with 35-40 people, some of them whom I had a chance to speak earlier and others who heard from their teammates. It was nice to sit down and teach a class at Cooper Union, and teaching it to College students made me feel a bit old but I guess it was ok .

I wrapped up around midnight, the students stayed overnight and when I came back the next morning I got to mentor another couple of groups, and others were just excited to show me what they have achieved overnight. Some of the projects were pretty impressive.

Judging time began around 1pm and I was asked to participate as one of the judges, we had 46 groups to grade with Technicality and Creativity grading.

After the best 5 teams were picked, everybody joined at the Auditorium to check the live presentations. There were projects using VR and personal thoughts of students they recorded overnight, it made me feel like I was watching some kind of Cerebro from X-men which was pretty nice. Another project was a solo hacker, who created an RPG game using Alexa from Amazon. One of my favorites and also winner of the best use of 3D on a Web/Mobile App and best Technical Hack was giving to Team Materialize, which they provided me with a description of their project.

“As computer scientists, architects, and artists, what are the ways in which we can alter and enhance our understanding of literature and explore its relation to space and material?

We wanted to investigate the interdisciplinary relationships between literature and design. How can we employ formal analysis of one discipline to inform creation in another? How does this alter our understanding of each discipline and allow us to see resonance between different fields of study?

Compelled to explore these relationships, we built a system to generate a 3-dimensional model of a piece of literature, traversing its plot chronologically and employing various methods of formal analysis to inform the shape and space of the design. As the system reads in the literature incrementally, it generates the objects form incrementally, thus alluding to narrative structures within the text. The design was created by mapping the parameters that are gathered from textual analysis to inputs for our generative algorithm used to create shape. The analysis of the text is ultimately used to alter and create space, and thus represents the unconscious experience of a ‘formal narrative’ within the piece of literature. The final shape was then rendered in Maya for aesthetic purposes and its subsequent deployment into the browser utilizing AutoDesk Forge.

The pipeline was built using Java, Processing (a visual-arts programming language), Autodesk Maya, and Autodesk Forge. Presented at The Cooper Union’s 2016 HackCooper Hackathon. Awarded “Most Technical Hack” and “Best use of 3D in a web app” "

Winners of "The best use of 3D" @AutodeskForge challenge - goes to "Materialize" 🎉🎉🎉🎉 pic.twitter.com/UDOSeBoWhH

It was a great weekend full of young minds, and inspiring how creative they become over 24 hours of development.

More pictures of the event can be seen here