If you’ve been thinking about developing on the Autodesk® Forge Platform, Autodesk’s new cloud platform, or on Autodesk® Fusion 360™—or, if you’re just curious about learning more about these technologies and what they could do to help your business or your career—join us for our upcoming free online hackathon.  This is our fourth online hackathon and you are welcome to participate in all or any part of it.

The Autodesk® App Store Forge and Fusion 360® Hackathon is an online event which consists of two segments:

We know that learning and implementing something new takes time and often gets put off so we’ve designed this event to give you the support you need - as well as a financial incentive - to motivate you to learn the APIs and publish your app on the Forge platform or on Fusion 360 in the Autodesk App Store. It will make taking action to publish apps simple and feasible.

The training webinars will help familiarize you with the Forge platform and in the open Q&A sessions you’ll have the opportunity to receive help in real-time from the Autodesk team answering your questions to help you develop your app(s). For all such new apps submitted to the Autodesk App Store by midnight on October 31, 2016 and accepted for publication in the store by November 30, 2016, each entrant of the Hackathon will receive US$ 500 for one eligible app per entrant.

Visit the pages on the Hackathon website to learn more about the opportunities and resources for developing on Forge, Fusion 360 and publishing in the Autodesk App Store and if you have questions send us an email.

If you instantiate a basic viewer with the Autodesk.Viewing.Private.GuiViewer3D class, you'll get an array of buttons like this:

This is the toolbar at Viewer version 2.10.

However, if there are unwanted functionalities on the bar, you can disable it using the following lines of code.

This will get rid of the explode button in the default Viewer toolbar.

Ace Editor for Any Extension in the Forge Viewer

As a followup to yesterday's post, here is an Ace Editor extension that allows you to write and test extensions! Gone are the days of including extensions in HTML files. Finally, we can run extensions, even the ones discussed on this blog, just by copy-and-pasting into the editor.

Before we take a look, just a warning that, as always, using eval() is a dangerous design decision on a public website! This is more for developers to try out extensions themselves.

Some key points in the code. I assumed the name of the extension was always "test". Here is how you remove an old extension and load a new one from the Ace Editor:

Many people might be using Philippe's Viewer Factory to create the Viewer in an index.js file. If you want debug information as found in this demo, you'll have to modify the index file to define an eventCallback function in the viewer's options.

Ace Editor for Three.js ShaderMaterials in the Forge Viewer

Reloading the viewer every time you make a change can be a hassle. Fortunately,  we can skip the refresh time by updating the scene's code directly within the viewer.

Here is an extension that implements a dynamically sizing Ace Editor within the viewer. In this case, I used the editor to write WebGL shader code that would update a selected fragment's material.

Philippe's post does a good job explaining how to make a panel from a DockingPanel. From there, it's just a matter of injecting the editor. Simply calling ace.edit("containerId") will create an editor (wrapped in a div) within the containerId div.

The Ace Editor has a .resize() function that resizes an editor to its parent element's size. We can thus use this to our advantage by calling .resize() every time containerId is resized. Here is a good jsfiddle that shows the correct DOM hierarchy. In order to check for a resize event, I used the following script which resizes whenever the mouse is down and moving:

Since the ace editor doesn't come with built-in GLSL error checking, I found a workaround by bkCore's shader editor example that compiles a test WebGL shader and prints out the errors. Some issues I ran into were errors that Three.js handles when creating a ShaderMaterial, so I did some error checking to parse out unnecessary errors.

Displaying the shaders uses a similar function I made for a heatmap demo I made a while back:

An interesting thing to note is that, in my demo, I allowed the user to input uniforms via a javascript JSON object and running the string with an eval call. I'd typically suggest against doing that, as such a feature might leave your website vulnerable to malicious attacks.

That said, the demo poses some interesting applications. I'll be looking into writing entire extensions within viewer panels like these as well that affect not only the textures, but also the geometry and other scene states as well.

For your convenience, here are links to content from Forge DevCon 2016:

The breakout sessions weren't recorded, but the DevTech team who presented at DevCon have created screencasts of their presentations. Here are the links:

And - just for fun - here is the recording of the entire 3DWebFest show that was held on the Wednesday evening of the conference.

With the model derivative API peeling itself away from the View and Data API, you can now translate stuff into OBJ at API level. Before you had to load up a viewer instance, which only takes in svf translated with this API. Now you can just load the OBJs that you've translated into your three.js scene!

I translated a f3d model that I have on hand into an obj, and loaded it into a scene. It's this car: 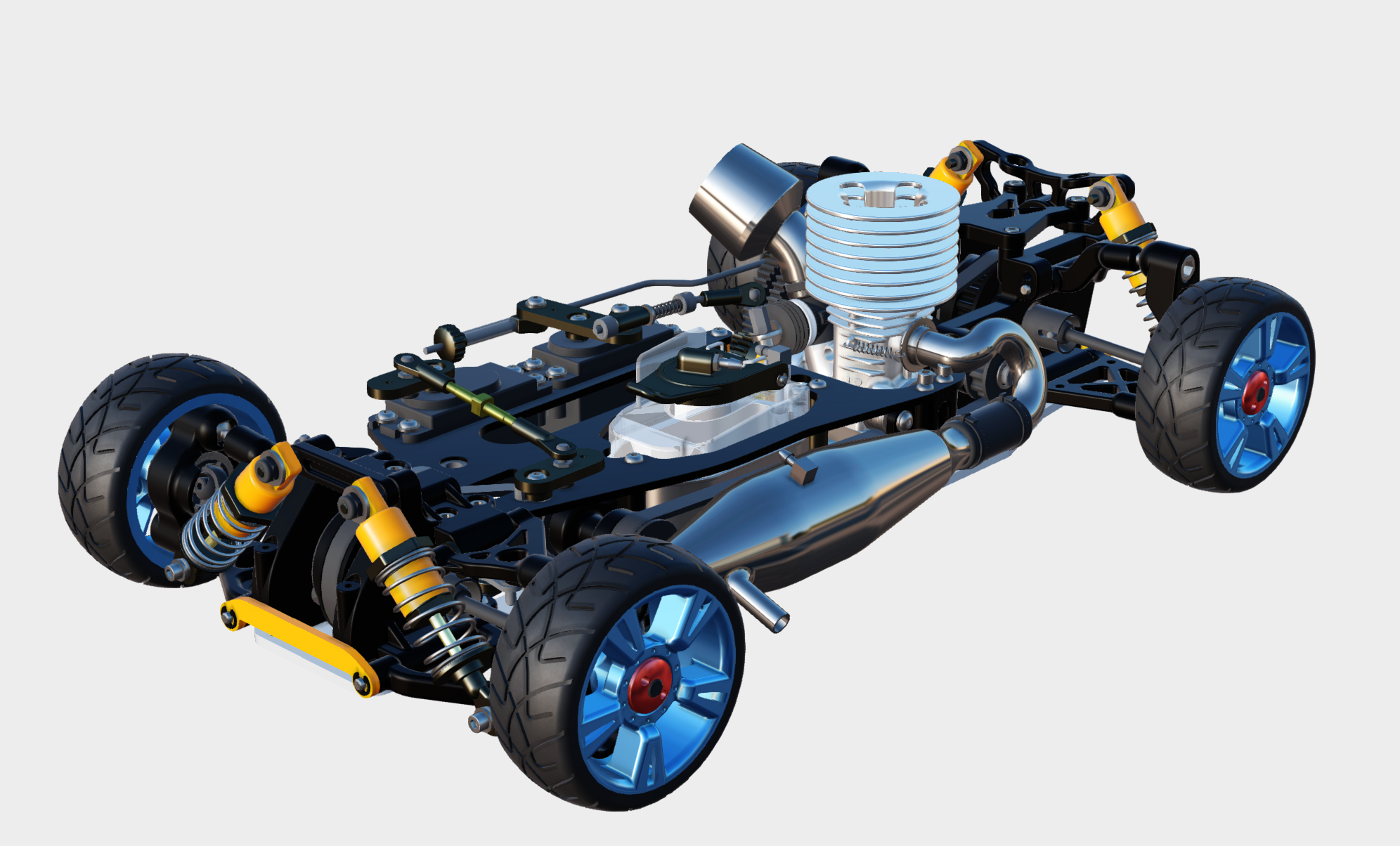 The API lets you translate parts of the model by specifying the part of the hierarchy you want to translate. So I translated just the suspension.

I just modified the three.js example code that lets you load your obj. Just replace the url of where the obj is.

I used THREE.MeshPhongMaterial instead of mapping a texture myself.

Here's the relevant part of the code:

Now you have a weird-ish looking blue suspension in your three.js scene! 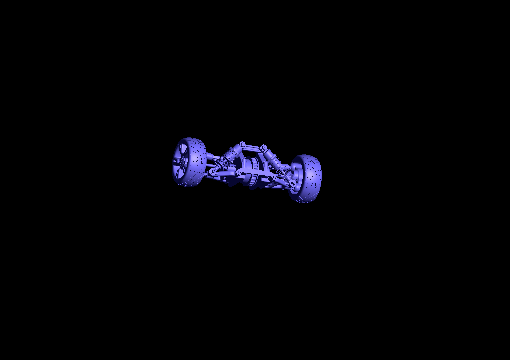 Get the code on GitHub

Getting help for Forge APIs

As part of our Forge platform updates announced in June at the Forge DevCon, we have now adopted StackOverflow as the primary portal for discussion of and support for all Autodesk Forge APIs. As a result, we will be closing down the 'View And Data' and 'AutoCAD I/O' forums on forums.autodesk.com  in the very near future.  Please ask your questions on StackOverflow from now on. Those forums have now been set to not allow new posts, but will continue to allow updates to existing threads - so we can finish off any outstanding discussions. In due course, we will switch the forum to entirely read-only.

Please visit https://developer.autodesk.com/en/support/get-help for information on how to tag your questions on StackOverflow so that the Forge Team can find and answer them, and also for details of how to contact us if you're not getting the answers you need there or if you have a question that is not appropriate for StackOverflow. (Note - The 'Get Help' page displays more information when you're logged in to the page with your Autodesk Id).

A big thank you to all of you who have been helping out your peers via this forum. I hope that you will continue to contribute your wisdom via StackOverflow.

Posted at 10:51 AM in Announcements, Forge, Stephen Preston | Permalink | Comments (1)

When creating your own buckets or uploading files to them on OSS, you only need to use 2 legged OAuth.
However, when accessing content on A360, you need to use 3 legged OAuth which requires a Callback URL. This URL will be called by our web service once the user authorized your app to do the operations it requested permission for - i.e. once the user clicked ALLOW on this dialog: 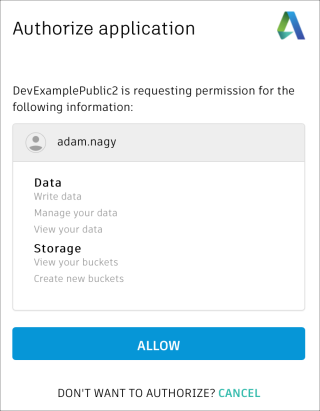 One problem is that when you register your app on the Forge website, the Callback URL cannot be "127.0.0.1" or "localhost". It needs to be something like "name.something": e.g. "example.com", "local.host", etc.

Fortunately, you can create such a mapping on your local system. Once you mapped e.g. "dev.example.com" to "127.0.0.1" then you could provide something like this as a Callback URL for your app (including the callback path in your app: /api/autodesk/callback, and the port number: 8000):