Practise with Fusion 360 and Raspberry Pi

These days, I played with Raspberry Pi. Thanks to the tutorials on internet, it went smoothly when I configured the environment, got familiar with the terminal and learnt how to get/set data to some sensors. 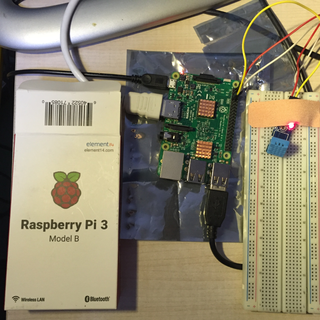 I got an idea to make an interesting experiment with Fusion 360. I practiced with (Socket.IO + Fusion 360 a few weeks ago. The idea is to emit the temperature value to Fusion 360. Next, the code of Fusion API will change the color of a model according to the values. To have more funs, the code will produce random cracks with the model as if a model is being fractured. I am cleaning up the code and will submit to Github soon.

I will be happy to share my practice in detail in the next blog. One thing I’d like to highlight is: at the beginning, I used Python only to collect the sensor data, but it frequently failed to transfer a valid data, but C code works well, however I am not familiar with Socket in C. Finally the solution is to combine C and  Python, i.e. C collects data and saves to a temp file, while Python reads the file and emit the values to my server. Yes, there is performance issue, but in most cases, it works well.

Sorry, the model looks ugly. I have a dream to be an art designer who designs tne cool model, but it looks I can only be a programmer so far. :)

Posted at 04:05 AM in Cloud, IoT, Xiaodong Liang | Permalink