« Cloud Security: OWASP Top 10 | Main | How to protect my intellectual property of my App on Autodesk Exchange part 1 »

Files with new extension is not downloadable from my website

I am investigating Autodesk 360 viewer these days, which is supposed to be an universal viewer for 3D models. It is currently under development, the supported model data type is *.svf by now.  To do some experiments I setup a website embedding A360 viewer on my website, and then published it to Windows Azure.

After the publishing process is completed, everything seems fine, I can see the text image and the widgets of the viewer, but the model does not load. After investigation with developer tools of Chrome, I found the downloading *.svf returns “http 404 not found”. BTW, I notice this error from the “network” tab of chrome developer tools(press F12), you can use other similar tools if you are using other browsers.

It is pretty weird to me, I ensure that all these *.svf files are posted to web service, and it should be there. With more investigation, I realized that the Azure website does not the MIME type of *.svf files, so I have to add my own MIME type to it. With local IIS, I can do it in IIS Manager: 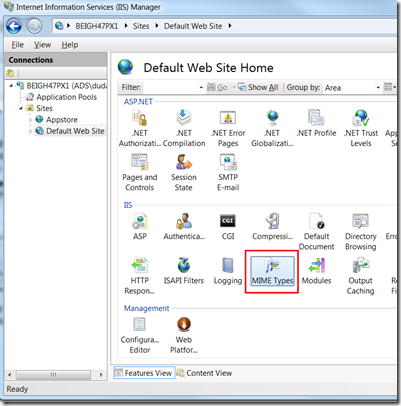 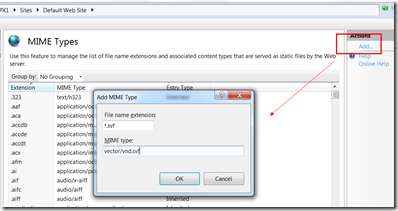 While in Windows Azure website, I do not have access to the IIS on cloud, this link gives me the right direction, edit the web.config file as below:

After republishing, every thing works fine now, the *.svf can be downloaded from web server and loaded into Autodesk 360 viewer. Most time the error message helps to identify the problem, but sometimes don’t, like this one. If you run into the same issue, hope this one helps.