Some customers wanted to set sub entities of custom object to the specific layers. When the corresponding layers changed ( such as visibility, color etc), the entities will update accordingly.

The solution is very straightforward. worldDraw->subEntityTraits().setLayer allows us to specify the specific primitives of the custom object to the specific layer. This method sets the AcGiSubEntityTraits object to use layerId to specify the layer on which to draw graphics primitives until the next call to this function, or the end of the worldDraw() or viewportDraw() execution.

I did an experiment based on SDK sample PolySample. In asdkpolyobj project >> poly.cpp  >> drawEdges method, add some lines as below.

The snapshots are two tests. One toggle MyTestLayer off. The other change the layer's color. 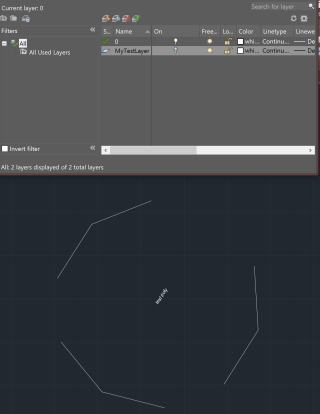 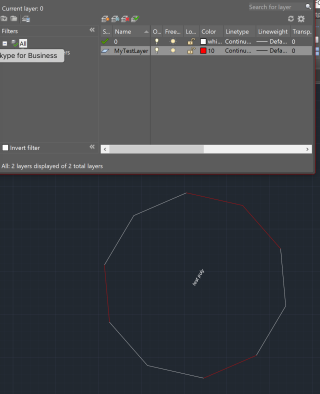 Migration After Fiber is Removed in AutoCAD 2015

There’s not that much work needed to port your apps to AutoCAD 2015(Longbow), unless you are using acedCommand or acedCmd.

The following is extracted from our DevDays PPT. If you feel tedious on my repeating the PPT, I’d recommend with the article written by our Blog Master Kean Walmsley : AutoCAD 2015: calling commands, or the video on the migration, or the demo samples codes which is availble at GitHub.

For this release, we’ve re-architected AutoCAD to completely strip out the use of Fibers and Fiber switching. Fibers are an old technology used in Windows that Microsoft stopped supporting several years ago. AutoCAD made heavy use of fibers and they are what allowed users to switch easily between drawings without interrupting commands. You’ve probably all seen this in action in old versions of AutoCAD – start a LINE command in one drawing, switch to another and draw a CIRCLE, then switch back to the first drawing and the LINE command is still active.

But using fibers was causing a lot of problems for us that we were spending more and more effort working around. For example, the .NET Framework has never supported Fiber Switching, and this is why when you switched documents in AutoCAD when debugging a .NET application, you’d often find that Visual Studio would fail to stop at a breakpoint– or it did break, but couldn’t display your code. That was Visual Studio getting confused by AutoCAD switching Fibers. You won’t experience that problem in Longbow now that we’ve removed Fibers. It also allows us to expose more of the ObjectARX SDK to .NET – the most exciting of which is that we now have a .NET version of acedCommand ((command) in LISP). That wasn’t possible before due to the problems caused by Fibers.

That means ObjectARX has more significant migration requirements. There are two migration areas of concern: the MDI API and use of acedCommand/acedCmd. Then you’ll have to make changes. How big a change depends on how you’re using it.

If you’re passing a complete set of command tokens to the AutoCAD commandline, then all you have to do is add an ‘S’ to the end of acedCommand or acedCmd. S stands for subroutine. This is when you’re sending an entire command, and not pausing for user input.

If you’re sending a PAUSE, or if you’re sending an incomplete set of command tokens (for example starting a line command and leaving it for the user to finish) then you have a lot more work to do. In this situation, you’ll be using acedCommandC – the coroutine version of the command – and you’ll now have to pass a pointer to a callback function as a command parameter. It’s a lot more complicated – so much so that you might even consider migrating your code that needs this to .NET instead.

But a lot of people use acedCommand like this. Starting a command and then prompting for user input until the command ends. In this case we’re starting the LINE command and issuing PAUSEs to allow the user to keep drawing additional line segments. When we migrate this code for Longbow, we have to use acedCommandC, because acedCommandS doesn’t support partial command token stacks or PAUSEs.

//Control is passed to myCallbackFn1 from AutoCAD

//This is never reached if the user cancels the command –

// that cancels your command as well.It is reached if command is ended

acedCommand is probably the most powerful API in ObjectARX. It allows you to embed entire AutoCAD commands within your own commands; and even to invoke partial commands, and then programmatically respond to how the user interacts with those commands. This saves ObjectARX and LISP developers a huge amount of work where otherwise they’d have to reproduce all the native command behavior in their own code – and now .NET developers get the same benefit.

The synchronous version of Command is Editor.Command, the equivalent of the subroutine version of acedCommand. This is how you invoke a complete command from your code. As you can see, the code is very similar to the ObjectARX version – you pass a full set of command tokens to the AutoCAD commandline (the editor), AutoCAD completes the command and immediately returns control back to your code.

//most popular case - invoke a whole command with no user interaction

There is also the asynchronous version of Command Editor.CommandAsync. This is the equivalent of the coroutine version of acedCommand. You’ll recall that acedCommandC required you to pass in a reference to a callback function. The .NET version is a little simpler. Because we’re using .NET Framework 4.5, we can make use of the async and await keywords to greatly simplify our asyncronous code. We mark our .NET commandmethod with the async keyword, and we can then use the await keyword inside that method. The await keyword tells AutoCAD where in your code to return control to after it has finished gathering user input. In this example, we’re simply starting the circle comamnd, using a PAUSE to let the user specify the circle center, and then specifying the circle radius in our code.

//create a circle of radius 2.0 at chosen location.

Using DIMPOST in a Lisp routine

Question
I'm trying to change DIMPOST to \X in a lisp routine. The program will not accept \X in a lsp program. I'm want to change Dimstyle using the set up; Method set to NONE for both primary(Metric) and alternate units(English) and alternate unit placement under the primary units. I can do this manually but not in the lisp.

Solution
With these Lisp statements, the dimension formatting were as requested by the developer :

; To reset the alternative dimension prefix and suffix

; To reset the primary dimension prefix and suffix

; To set the orientation of the alternative dimension over the primary dimension

Get mouse (cursor) position without event

AutoCAD API provides AcEdInputPointManager.Inputpointmonitor which can monitor any input of the user, including mouse. API also allows you to monitor Windows message. Sometimes you may just need to get the current mouse position without any event. The following is code demo. Actually, it just get the current cursor position and convert it to AutoCAD coordinate. It also takes UCS into consideration.

//get cursor position by Windows API

//Returns the viewport number based on

//translate the WCS coordinate to UCS

1. get he current view record

zooming: adjust height and width with a factor

orbiting: adjust the view direction along an axis.

3. update the current view with the updated view record.

//get the view center point

//assume we need to zoom the view out in scaling 10

//assume we need to orbit the view direction

Using AutoLISP to read an access database via ADO

Issue
How can you access the data in a database rows using Visual LISP functions ?

Solution
Although there are no direct Visual LISP functions to read databases, you can use Microsoft's ActiveX ADO technology from AutoLISP to do this.

The following code illustrates how to read the Customer table from the NorthWind sample database in the Office products using either the Microsoft Access drivers or ODBC.

;;; Set the CursorType, and Locking Type

;;; Close only works if it's Opened !, this can usually be tested by checking if
a LDB file exists.
;;; Check to see that the Connection Object is open here ->
(setq coState (vlax-get-property ConnectionObject 'State))
(if (and (findfile (strcat MDB_File ".ldb")) (= coState adok-adStateOpen))
(vlax-invoke-method ConnectionObject "Close")
(princ "\nConnection Object is not Open, please delete the LDB file if
needed.")
)
(Clean_Up)
)
;;; Exit if Type Library has NOT been loaded.
(progn
(alert (strcat "Exiting - Type Library was Not Loaded: \"" ADO_DLLPath
"msado15.dll\""))
(exit)
)
)
)

The following .NET code is converted from the VBA demo directly. Firstly, you need to add the library of CAO by adding

where *** is the language. e.g. cao16deu.tlb is for English version.

'get the DBCONNECT object

'connect to the datasource

'you want to see both the link templates

Issue
How can I discover what tables are available AutoLISP?

There are two ASILISP functions that help here. Both return cursors to system tables so you can step through the records to find what you need. For example, this code will return all the available providers:

Typical results after stepping through the table (using the 'next' option above) might be:

Issue
Can I gain access to the "Open File Dialog" (with preview) found only in AutoCAD with VBA?

Solution
You can do this through the communication interface with AutoLISP and AutoCAD. The AutoLISP function, getfiled, behaves as the AutoCAD "Open File Dialog" and allows .DWG files to be previewed.

‘line.Set the return value to a user-defined

'Use the GetVariable method to retrieve this

Issue
How do I delete a database link from an entity using the CAO API and Visual LISP?

Solution
The following is a short Visual LISP example that prompts the user to select an object. It then deletes any links that are associated with that object.

;;; This function deletes a link from a selected object


;;; Iterate through the links and delete the link
;;; if it has the same ObjectID as the link
(vlax-for thisLink linkSel