Can I Run AutoCAD P&ID/Plant 3D in Console Mode?

I would like to do some batch processing in AutoCAD Plant 3D. May I use AcCoreConsole.exe for it?

For Plant 3D it should work, but with some limitations, of course:

1) In the Windows Explorer, go to the C:\Program Files\Autodesk\AutoCAD Plant 3D 2013 – English;

I should clarify that the Plant 3D Object Enablers work, but the “Plant Environment” is full of ARX apps that will not load into AcCoreConsole.exe. Therefore, none of the PLANT product’s commands are available.

Unfortunately, the same approach will not work for AutoCAD P&ID, since it does not have Object Enablers usable outside of AutoCAD.

I want to say “Thank you” to Jorge Lopez from the Plant development team for his infinite help in answering questions like this!

AutoCAD P&ID/Plant 3D: Is there any API to recalculate Tags?

When a tag format changes, manual update of the respective tags is a very time consuming operation. Can I update the tags with the API?

To update a tag, you can simply write out a blank tag value with the DataLinksManager.SetProperties() which causes a recalc.

Here is a sample how to do this. It works for Piping and P&ID.

public void PexTagUpdate() // This method can have any name

// A tag that is currently blank will remain blank.

continue; // Not a Plant object

If you plan to start developing for any new product, a quick ‘getting started’ guide can be very useful. Here is what you need to develop for AutoCAD P&ID/Plant 3D 2013.

Setting up the environment:

With all the above downloaded and installed, launch Visual C# Express or Visual Basic Express. Here I’ll show some images on Visual C#. Go to menu ‘File’, then ‘New Project’. On the window, select ‘Class Library’ as project type, finally give it a name, that cannot contains spaces or start with numbers (e.g. MyFirstPlant3DApp). 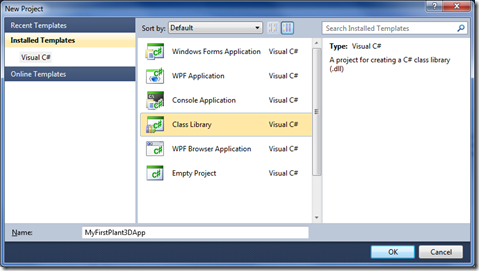 Now, following the image below, (1) go to ‘Solution Explorer’ palette. If you cannot see it, go to menu ‘View’, then submenu ‘Other Windows’ and select it. Now (2) right click on references to ‘Add Reference’. 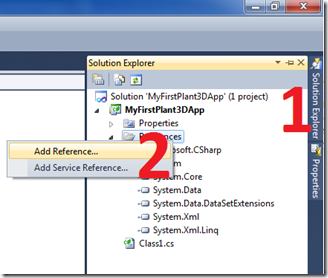 On the window that opens (not shown), click on ‘Browse’ and navigate to AutoCAD SDK folder. Under \ObjectARX 2013\inc\ select AcMgd.dll, AcCoreMgd.dll and AcDbMgd.dll. These references will be used to access AutoCAD basic features required to build an application, such as command line and selection mechanism.

All AutoCAD and P&ID/Plant3D references must be marked with Copy Local equals false. This is extremely important. Otherwise, AutoCAD may crash unexpected. Now you have a .NET project ready to use any C# sample available at this blog, try any sample for P&ID or Plant 3D.

After copy & paste any sample code or write your own, go to menu ‘Debug’ then ‘Build Solution’, which will build a .dll, for this sample project, it should be at bin\Release\MyFirstPlant3DApp.dll (Visual Express always create .dll at Release folder for Build and at Debug folder while debugging, pay attention).

Identifying the group name of a command

Posted at 05:01 AM in AutoCAD, ObjectARX, Virupaksha Aithal | Permalink | Comments (0)

You can append the following prefixes to all AutoCAD commands and options in order to avoid localization issues:

An underscore _
This calls the English version of the command. For example, the command, _LINE, can be issued from all localized releases and English AutoCAD.

A period .
This calls the original command when a command was redefined. For example, whena user redefines the LINE command. In such a case, _.line can be issued from all localized releases and English AutoCAD. It will always invoke the original LINE command.

How can I start learning AutoCAD P&ID/Plant 3D API?

I would like to customize AutoCAD Plant 3D for my company needs. Is there any API for this? How can get it?

A good point to start with is the page on the Autodesk Developer Center, describing the API for AutoCAD P&ID and AutoCAD Plant 3D:

The API for these two products is called Plant SDK and can be downloaded from the page mentioned above. It includes documentation, code samples, include files and libraries for C++ development and .NET libraries.

Issue
How do I maximize an active document window in AutoCAD environment?

Solution
The sample code that follows maximizes an active document window. Before proceeding, be sure that the project supports MFC and .DLL as file extensions.

//   get the pointer to AutoCAD's main frame window.

// get the handle of the active window

I use the AutoCAD RECTANG command to draw an unrotated rectangle with the FILLET option. When prompted for the startAng and endAng of the resulting AcDbPolyline's corner arcs, the values are always 0 and 90 degree.

However, if the polyline is selected and LIST is typed, the values for startAng and endAng are displayed correctly with only the upper-right corner sweeping from 90 to 0 degrees. Why ?

The LIST command and entity definition data for an arc uses AcDbArc class information, whereas a polyline provides AcGeCircArc2d information.

Querying the arcs of a filleted rectangle, which is represented as a polyline entity, pPoly:

The start and end angles for an AcDbArc are invariably measured in respect to the +x axis. Also, the positive direction for rotation is considered to be counter-clockwise. Vertex 0, the upper-left corner will then list a start angle=180 and an end angle=90.

I need to use a 2 dimensional array in my program. I would like to know if it's possible using a dynamic array (like AcDbIntArray, AcDbObjectIdArray, ...) in 2 dimensions. How can I do this ? In C++ I can use array[][]...and in ObjectARX ? I'll need an array with 3 lines and x (dynamic) columns : [3][x]

If you had two static dimensions, then of course you could simulate the use of a 2D array with a linear array. As you have one static dimension (3), you can create a static array of AcDbObjectIDArrays (for example), which are of course dynamic. Here is some code which creates an array of IMAX x JMAX, though JMAX could be variable for each sub-array. I have populated the array with IDs from entities the user must select, and then you can see how it is simple to use the typical syntax idArray[i][j] to access the contents of the array.

Here is an application that Viru and I have been working intermittently for a few months now.

It is an application for the trial licensing of AutoCAD plugins and more importantly, to track the usage of the commands by the end-user using a cloud based service. This will help the plugin developers by providing an insight into the features of their plugins that are frequently used by the end-users.

This sample application is to provide a simple example on using Windows Azure Cloud in an AutoCAD plugin and is not meant to be a robust trial licensing or application metrics gathering utility.

Here is a diagram and an explanation of its working at a broad level. 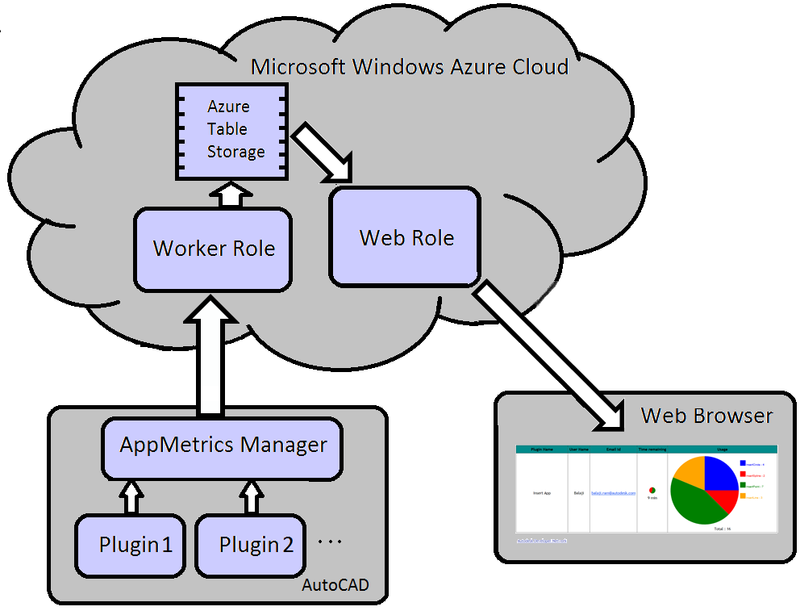 The “AppMetrics Manager” is a module that the AutoCAD plugins use to check for the availability of the trial license and to report the usage of their commands.

The “AppMetrics Manager” passes on the request for a trial license and the command usage information to the Azure worker role.

An Azure web role retrieves the details from the Azure Table Storage, which is then displayed in a web browser.

The sample projects for these modules and an AutoCAD plugin bundle to try out its working can be downloaded from the link below.

To try it, you will need the Windows Azure SDK to be installed in your system and if haven’t installed it already, you can install it from here

The Visual Studio solutions for the various modules have been kept separate for ease of debugging and can be built in the following order to resolve its dependencies:

2) “AppMetricsInterface”: This defines the common interface that will be used by the Worker role and the “AppMetricsManager” to communicate. There are no additional references for this solution and building it should be straight-forward.

3) “AppMetricsManager” :  This solution has dependencies on the usual AutoCAD references such as “AcDbMgd.dll”, “AcMgd.dll” and “AcCoreMgd.dll”. Ensure that these are referenced from the ObjectARX 2013 folder and it should then build ok.

4) “AppMetricsWorkerRole”: The Azure Worker role solution needs references to the “AppMetricsDatabaseModel” and “AppMetricsInterface” assemblies that have been built. Also, ensure that the other references to “Microsoft.WindowsAzure.XXXX” are correctly resolved.

5) “AppMetricsWebRole”: The Azure Worker role solution needs reference to the “AppMetricsDatabaseModel” assembly that has been built. Also, ensure that the other references to “Microsoft.WindowsAzure.XXXXXX” are correctly resolved.

6) “AppMetricsTestPlugin.bundle”: This is a bundle of a AutoCAD plugin in the Autoloader bundle format. Copy the entire bundle to folder from which AutoCAD can load it at startup. The folder to copy the bundle is “%appdata%\Autodesk\ApplicationPlugins”. The bundle folder has the source for a test
plugin which can be built and debugged. The Visual Studio solution can be found under the “Contents\Source” folder inside the bundle folder. Build this solution just as you would build a regular AutoCAD .Net plugin. After the build has succeeded, copy the “AppMetricsManager.dll” that has already been built and place it in the “Contents\Windows” folder inside the bundle folder.

Now, after all the solutions have been built, you are all set to try it using the Azure compute/storage emulator.

Here are the steps to try it out: 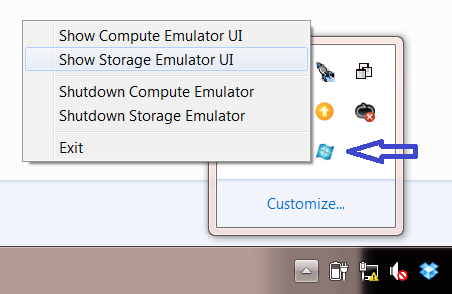 2) Start the Web Role : Open the “AppMetricsWebRole“solution and hit F5. This should start the Azure compute emulator and start the web role. It might take a few minutes to start it in the emulator and can be verified by clicking on the small icon in the tray and starting the compute emulator UI just as we did
for the worker role. After the Web role starts, it should open the web browser and display the app details which is now empty as shown here :

3) Start AutoCAD 2013 : Navigate to the “%appdata%\Autodesk\ApplicationPlugins” folder and open the Visual Studio solution under “AppMetricsTestPlugin1.bundle\Contents\Source” sub folder. Set the path to AutoCAD 2013 as the external program to launch, by changing the project settings just as you would do for any AutoCAD .Net plugin. Hit F5 key to launch AutoCAD 2013 and to load the bundle.

4) Provide Contact Details: On startup, the test plugin displays a form prompting the end-user to provide the contact details. This information is requested only if the plugin is being installed
for the first time and not when AutoCAD is restarted. The contact details are used for display in the Web browser as we will see a little later. 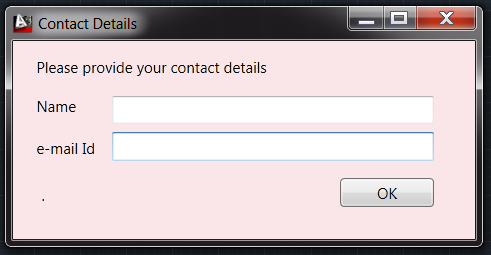 After you provide the contact details, the trial duration of the plugin is displayed in the command prompt as shown here:

5) Using the AppMetricsTest plugin : The ribbon panel for the test plugin can be found under the “Plugins” tab as is the case with most of the plugins available in the AutoCAD Exchange store. While using the commands to insert smileys in the drawing, the remaining trial duration is displayed in the command prompt as shown in the screenshot. 6) Viewing the usage statistics in a web browser: The web browser which is already open should now display the usage metrics and the trial duration available for the application as shown in this screenshot.