Where is OMF SDK?

Q. Where can find OMF SDK?

A. OMF SDK is posted on the ADN extranet http://adn.autodesk.com, the members only site.

Note: OMF requires a separate license agreement and is provided to the member of ADN only.

The object type in question happens to be an AutoCAD MEP MVBlock.

Would AcCoreConsole recognise the object as valid or would it be a zombie, i.e. a proxy object?

Answer: I checked with the development team and received several confirmations saying that this should work:

AcCoreConsole does recognise MVBlock, and the object can be moved in the same way as in AutoCAD.

The AutoCAD MEP object enablers get loaded on demand in AcCoreConsole.exe.

Here is a test suite proving it: 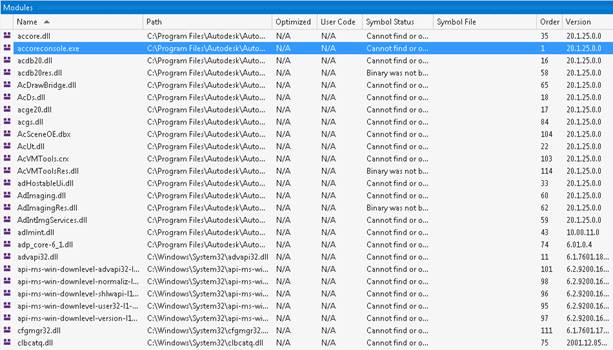 2. accoreconsole.exe /i oneBox.dwg: Open a dwg with only one box. A few more AutoCAD modules get loaded, but no AEC modules: 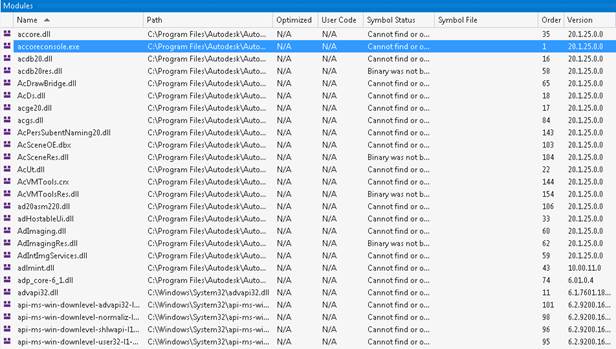 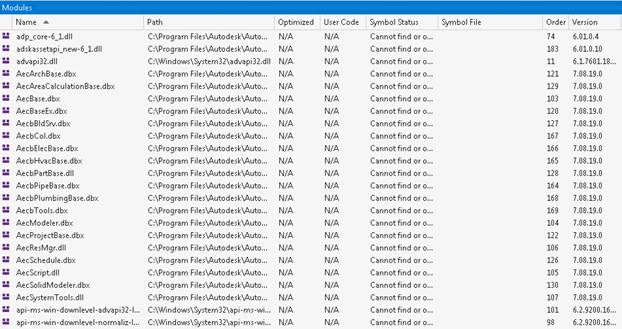 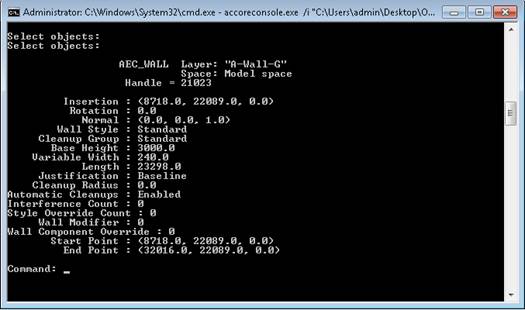 4. accoreconsole.exe /i oneDuct.dwg: Open a dwg with only one duct. AEC and AECB module are loaded: 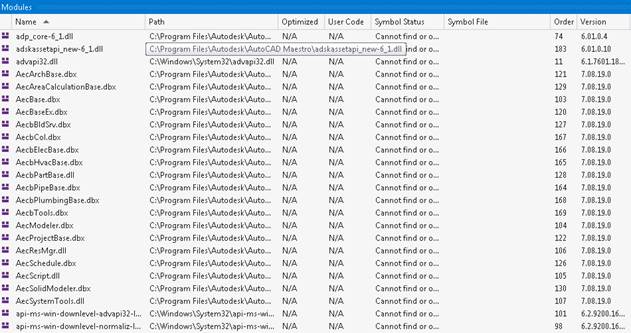 I hope this helps.

When a side database is read in using any mode other than SH_DENYNO, some OMF functionalities do not work properly. For example, when wall properties are queried, the following error may occur:

The problem is due to the way that AutoCAD handles the reading of side databases, thus AutoCAD Architecture cannot do much in this regard.

You'll also find that some of the ACA/MEP entities do not behave as you'd expect them in case of using RealDWG to open AutoCAD Architecture or MEP drawings. E.g. the ACA/MEP entities might not call the drawing primitives of your AcGi implementation when you make them draw themselves.

If side databases are opened with SH_DENYNO, they are fully loaded and the relationship graph will be complete.

If they are loaded any other way, you need to call AecAppDbx::drawingPromoterAndIniter() or AcDbDatabase::closeInput() on it. That forces all objects to be pulled from the disk.

This is not ideal, but it is the only way that AutoCAD Architecture can guarantee that the relationship graph is complete. This function always needs to be called to make sure that the necessary promotion and cleanup takes place.

So, the solution is to either open the side database with SH_DENYNO, or call AecAppDbx::drawingPromoterAndIniter() or AcDbDatabase::closeInput() on the opened database.

We would like to create a new Multi-View Block definition. Our program will fill in Name and Description and will need to create "General", "Model", "Plan 1-100", "Plan 1-50" and "Reflected" on Display Representation list box. For "General" and "Model", they will have view block names in View Blocks list box with View Directions assigned. Just like one can do in 'Multi-View Block Definition Properties' dialog box. Please provide some sample.

A sample code below demonstrates how to create a MultiView block definition from OMF. This sample adds a new MultiViewBlock definition named "myMvBlockDefOMF". It assumes that a block definition named "myBlock" exists. Please make one beforehand. (Just a circle would do.) This sample adds only one AecMvBlockDispRepDef, but you can add more as you need. Same for AecMvBlockViewDefinition. Try changing the value in the code below and compare them in UI. You will see the correspondence between UI and OMF code.

//  fill in the description
pMvBlockDef->setDescription(_T("This is MvBlock Definition added from OMF."));

//  for the simplicity we will use the first rep only.
if(ids.length()>0) pMvBlockDispRepDef->setDisplayRep(ids[0]);

How can I insert a multiple view block instance (AecDbMvBlockRef) with associated attributes using OMF? For example, I'd like to insert a column grid tag and provide a tag number to it.

Anchoring an AecDbMvBlockRef as a schedule tag using OMF

I want to add an anchor onto AecDbMvBlockRef in order to programmatically make it a schedule tag for another ACA object. How can I do that in OMF?

We can use AecDbAnchorTagToEnt to do the intended task. The following sample code inserts a metric window tag and anchors it to a window. This sample uses "M_Aec6_Window_Tag" multi view block definition. If it hasn't been imported yet, please drag and drop it from the Design Center before you run the sample.

Note that with this sample, the number in the tag will not be filled automatically. You need to add a property set to the window beforehand to have the tag retrieve the value. You can add a window property set manually. If you want to use OMF, please refer to a blog post Adding a property set programmatically using OMF.

// Here, we hard code the rotation and scale factor for simplicity.
// It should work well on Metric template.
mvBlkRef->setRotation(0);
AcGeScale3d scale3d(350);
mvBlkRef->setScale(scale3d);

Using the command _AecPropertyDataEdit and Add button, we can add a property set to an AEC object. How can I do this programmatically in OMF?

The property set object is added to AEC object's extension dictionary named "AEC_PROPERTY_SETS". Its name will be anonymous (starting with "*"). In order to create it correctly, a property set definition must be referenced, as in the UI. The latter is stored in the dictionary "AEC_PROPERTY_SET_DEFS" under AutoCAD Named Object Dictionary). The following code shows exactly how to do it.

DictionaryRecordNameTranslator - what is the usage?

I see a class called DictionaryRecordNameTranslator in the ACA .NET API.  What is the usage of it?  This would be great if I don't need to translate the property sets, etc., but just add a translator runtime.

The name "Translator" is probably misleading and adding a confusion here.  Unfortunately this class is not meant for translation.

DictionaryRecordnameTranslator class (or AecNameTranslator in OMF) does not actually translate anything; i.e., it doesn’t know how to translate English to German, for example. All it really does is provide a named object a way to identify where its global and local name are located. Some objects store their global name in the ‘Name’ field and local name in the ‘AlternateName’ field, while others are reversed. We needed some way for UI elements to say ‘give me your local name’, rather than always assuming the ‘Name’ is what they wanted. This means that the object still needs to provide translated strings! Simply put, an AecNameTranslator does not provide a translation, it just says where the translation is located.

Here is some additional note from OMF reference guide:

"An AecNameTranslator is a class that contains a mapping of global names to localized names. It is intended to be used by programmatic objects that are normally defined by users, such as the classifications used in Space standards, to define a global name that is used by the creator of the programmatic object while displaying a translated name to the user.

Derived classes can be used to define where the global name comes from. For example, AecNameTranslatorDictRecordName defines a displayName function that takes an AecDbDictRecord parameter, gets the dictionary name from it, and returns the corresponding localized name. Alternatively, AecNameTranslatorDictRecordName returns the localized name corresponding to the dictionary record's alternate name."

In AutoCAD Architecture(ACA),  entities such as polylines designed to form the boundary of an associative space must have their Bound Spaces property set to Yes before generating the space. 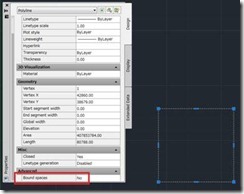